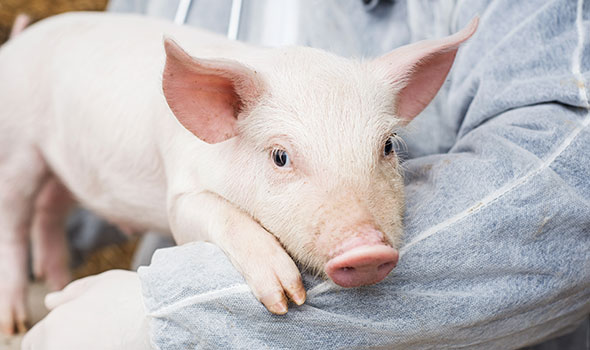 African Swine Fever is an infectious viral disease and is transmitted via contact between animals or indirectly via transport, humans, infected materials or feed.

What is African Swine Fever?

African Swine Fever is an infectious viral disease. It is a complex DNA virus that is highly infectious and often fatal for pigs. The illness originated in Africa, but has been making its way towards the European Union from Russia and Ukraine since 2007.

The illness originated in Africa. In 1921, the virus was first described in Kenya. In 1986, a fattener and sow farm in South Holland was infected.

Since 2017, the illness has been travelling through areas like the Caucasus, Russia, and Ukraine towards the European Union. In 2017, the ASF was discovered at a Czech farm. It was a significant discovery, considering that the nearest infected farm was 400 km away. It was also unsettling that the number of reports exceeded 100 over a short period of time. In early June 2018, a pig farm in Poland had to clear out 5,900 pigs and 600 sows. In early July, the virus was detected on a Romanian pig farm with 45,000 animals.

The spread of African Swine Fever

The virus can be transmitted directly and indirectly. Examples of direct transmission are contact between porcine animals as well as with soft ticks in (sub)tropical regions, and via infected materials or food.

African Swine Fever can express itself in various ways: from virtually no symptoms to bruising and sudden death. Pigs that have been affected by African Swine Fever become acutely ill after an incubation period of 4 to 19 days. Other symptoms of the illness are fever (40 to 41°C), leukopenia (decreased white blood cell count), haemorrhaging of internal organs, bruising (especially on the ears and flanks) and sudden death.

The most common symptoms are:

The symptoms may strongly resemble those of classic swine fever. The illnesses are difficult to differentiate from each other.

The Netherlands Enterprise Agency has set the following standards for a simple washing area:

© 2021 Schippers Export BV | All rights reserved | All prices are in Euros, excl VAT and ex.-works Belgium | Everything for professional livestock farming

Possibly some functionalities are blocked in your browser and are not working properly.

Causes may be an outdated browser, or if you are using the browser in private / incognito mode.